Get fresh music recommendations delivered to your inbox every Friday.
We've updated our Terms of Use. You can review the changes here.

In the Shadows (ft. Ed King)

by Escape the Clouds 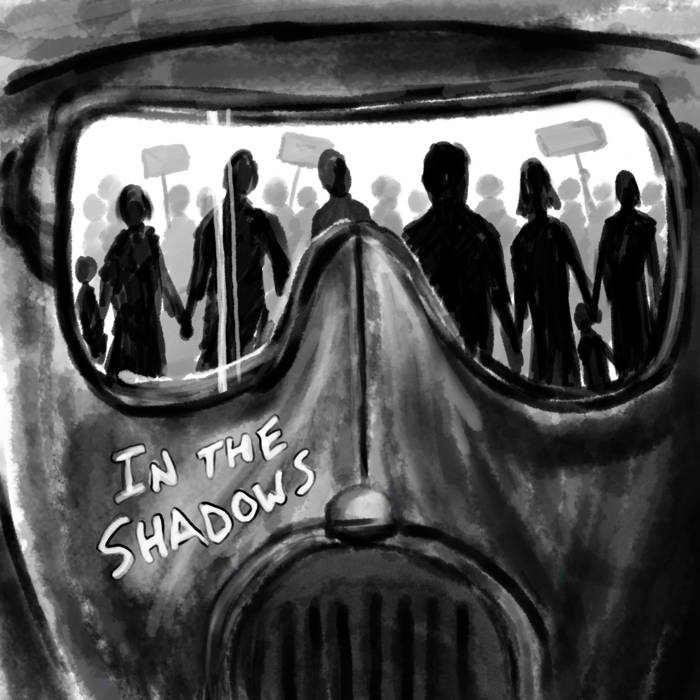 100% of each sale of this song will be donated to the NAACP Legal Defense Fund. www.naacpldf.org
==============================
About the song: Memorial Day weekend 2020, during a jam session with my friend Ed King, this song started taking shape. At the time, it had no lyrics. Monday evening, after Ed went home. I continued working on the song, still unsure where to take the theme.

Tuesday, the world woke up to the news of George Floyd's death at the hands of Minneapolis police. In the middle of a city street, an unarmed Black man was killed in the street without ever receiving the fair trial the Constitution guarantees. A seventeen year old girl filmed his last, desperate words, calling for his dead mother.

During that week, as I felt the same anguish and rage that many felt watching that video, I had a realization: at the very same moment I was working on this song, 1400 miles away, George Floyd was dying under that officer's knee. And with that, the lyrics came flowing out in a torrent of emotion.

Our country's history is replete with events like these, leaving scars that span generations. My state, Florida, had the highest rate of lynchings per capita, 3,959 between 1887 and 1950. And those who think the systems and ideologies that tolerated that, sanctioned that, went away with the Civil Rights Act of 1964 are profoundly mistaken. The rules that should apply to all simply still don't apply to some, in particular with the justice system and law enforcement.

Of course there are plenty of good cops--and I've personally dealt with many--but law enforcement officers who witness colleagues doing terrible things, and don't speak up, don't stand up the for citizens' rights that they swore to protect, are complicit through their silence. Just as complicit are those who deny a problem exists, or who prefer the way things as they are. These Samuel Seaburys, if you will--like the pro-British Loyalist Bishop from the Revolutionary War, and his grandson, who believed slavery was the natural order of things--work to renounce, restrict, or distract from progress, and maintain the status quo.

Racism isn't some abstract concept. It's directly affected my family. It's directly affected my friend Ed, who plays on this track. It's put many of our friends in danger, made them feel "less than", forced them to work harder than those around them to go the same distance. I'm concerned for my daughter, and the world we'll leave for her. As the song says, if some people feel empowered enough to do terrible things in broad daylight, as the world watches, what kind of things aren't we seeing?

So, this song is not just a call to the civilian population, to take a stand and protest. It's a call to everyone, including law enforcement and our elected officials, to look within themselves, take responsibility, and do the right thing.

Sick to our stomachs, until we dry heave rage.
Watching grown men call for mama as the life inside them wanes.
“This isn’t who we are.” (Wrong. This is exactly who we’ve been: )
A nation awash in multi-generational sins.

Chorus 1
If they can do this in broad daylight,
Imagine everything they do in the shadows….
If we do nothing while the world burns,
We deserve the darkness that comes tomorrow.

Verse 2
Don’t kneel, don’t yell… air your grievances politely.
Don’t fuss, all’s well, say the Samuel Seaburys.
So comfortable in the skin in which they were born.
Both their weapon and the armor shielding them from harm.

They claim all’s fair, but they’d never trade places.
Just return to the normal where they always come up aces.
They’ve never stared down gas masks and rubber truncheons
Or faced “protectors” lusting for executions.

Chorus 2
If they can do this in broad daylight,
Imagine everything they do in the shadows….
If we do nothing while the world burns,
We deserve the darkness that comes tomorrow.

Bridge
The relics of the past must come crashing down.
Together we can change the world, starting with our own town.
History can be written in the words of a single voice.
Imagine when a million stand and make their choice.

Verse 3
Why wonder what our children will think of us tomorrow…
when we don’t know if they’ll live to see tonight?
And if they see tomorrow, will it only be time borrowed…
or will they finally see the end of the injustices we fight?

Chorus 3
If they can do this in broad daylight,
Imagine everything they do in the shadows….
If we do nothing while the world burns,
We deserve the darkness that comes tomorrow.

If they can do this in broad daylight,
Imagine everything they do in the shadows….
If we do nothing while the world burns,
We deserve the ashes that fall tomorrow.

Escape the Clouds crafts stories through both music and words, creating vivid, character-driven steampunk music. For more information about this and other work, please visit:

Bandcamp Daily  your guide to the world of Bandcamp

Sampa The Great joins the show to discuss her release, "As Above, So Below".